South Australia is a proud state. We have creative people, rich culture and breathtaking landscapes. Our state is so much more than a dumping ground for nuclear waste.

The No Dump Alliance is made up of spokespeople and members from Traditional Owner groups, church and faith groups, trade unions, civil society and environmental groups.

The No Dump Alliance was formed in 2016 to fight proposed plans for a high-level international nuclear waste dump. Those plans were abandoned in the face of strong opposition across South Australia -- a great result! In 2017, the No Dump Alliance broadened its scope to address the federal government’s targeting of sites in the Kimba region on the Eyre Peninsula and at Wallerberdina in the Flinders Ranges. As of 2020, a site near Kimba is the sole focus of the federal government.

Join the Alliance! It's free and a great way to stay in contact with -- and support -- the campaign against a national nuclear waste dump in SA.

August 2020: Please ask Senators to oppose the National Radioactive Waste Management Amendment Bill ‒ draft legislation which seeks to cement Kimba as the national radioactive waste site and to remove this decision from a judicial review initiated by Barngarla Traditional Owners or anyone else. On June 11, the Bill passed through the House of Representatives ‒ but importantly Labor and most of the crossbench spoke against it. A Senate Inquiry into the Amendment Bill has begun and is expected to issue its report in late August. Then comes an important Senate vote regarding the Bill.

Barngarla Traditional Owners ‒ who are unanimous in their opposition to the nuclear dump ‒ were denied the right to participate in a 'community ballot' and now their rights of appeal will be removed if the government gets its way. Federal Parliament's Human Rights Committee found that the nuclear dump proposal is a violation of the Barngarla People's Human Rights. A letter from the Barngarla Determination Aboriginal Corporation to the federal government states: "It remains shocking and saddening that in the 21st Century, First Nations people would have to fight for the right to vote in Australia and that the Federal Government would deliberately remove judicial oversight of its actions in circumstances where the Human Rights Committee, a bipartisan committee no less, has considered the process flawed."

Please put your name to this letter to all non-government SA Senators asking them to oppose the National Radioactive Waste Management Amendment Bill: https://www.conservationsa.org.au/no_place_for_nuclear_waste

Please also write to SA Premier Steven Marshall asking him to oppose the federal government's imposition of a nuclear waste dump and to uphold the SA Nuclear Waste Facility (Prohibition) Act. You can email the Premier at [email protected], or add your name to the an online letter and add any comments you like.

South Australians, with nationwide support, defeated plans for an international high-level nuclear waste dump ‒ an incredible result from a determined community. We now face another threat: the federal government's plan to establish a nuclear waste dump in SA.

No convincing argument has been made for a nuclear waste dump anywhere in Australia and we object to the federal government targeting regional South Australia. Most of this waste is currently stored where it is produced, at the Australian Nuclear Science and Technology Organisation’s nuclear facility at Lucas Heights in southern Sydney. ANSTO itself has acknowledged that it can manage this waste on-site for decades.

The federal government’s plan is not a permanent solution for Australia’s most hazardous nuclear waste ‒ long-lived intermediate-level waste ‒ but only a temporary storage plan. The government wants to store this toxic waste above-ground in SA for up to 100 years. The federal government is not even seriously considering options for permanent disposal of this long-lived intermediate-level waste ‒ the only plan is 'interim' storage in SA. South Australians are being pushed to house toxic waste with no long-term solution proposed or clear case made why it is better to move the waste from Lucas Heights.

Kimba is a productive agricultural region. This is in conflict with the National Health and Medical Research Council's Code of Practice on radioactive waste which states that radioactive waste disposal sites should have "little or no potential for agriculture".

Now is the time to stand up. South Australians have fought and won the nuclear waste battle before. We urge the federal government to abandon plans for a dump in South Australia and instead continue with extended secure interim storage at Lucas Heights. This, coupled with a transparent and evidence-based assessment of all the options is the best way to advance long term responsible radioactive waste management in Australia. 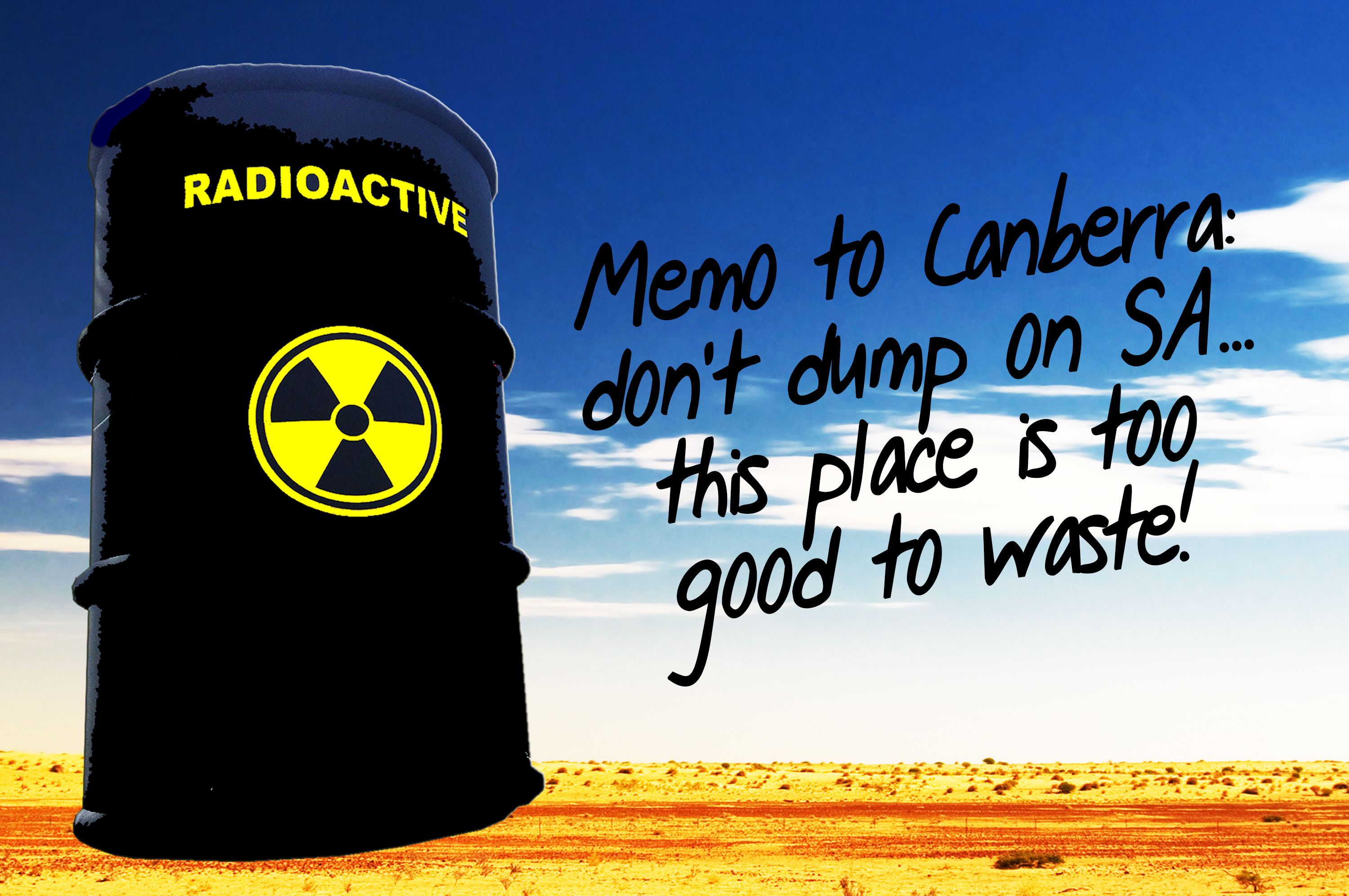 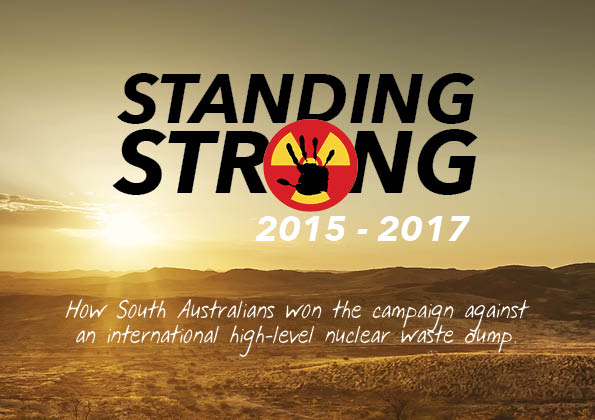 Feb 2018: Marking three years since Jay Weatherill announced the Royal Commission into the Nuclear Fuel Cycle, a book has been released telling the story of how communities came together successfully to say NO to a high level international nuclear waste dump. Click here to view online and click here for more info about the book.

Aug 28, 2020
NITV covered a story on the opposition of Barngarla people to a nuclear dump on their Country: 'Barngarla continue fight against plan to dump nuclear waste on Country' Michele Madigan's article in... Read more

Rally Don't Dump on SA - We Still Say NO!

Saturday, November 03, 2018 at 11:30 AM
The federal government is currently deciding on whether to build a facility to house Australia's nuclear waste at either Kimba on the Eyre Peninsula or near Hawker in the Flinders Ranges. More... Read more
Do you like this page?
Tweet
Join the Alliance Join as a Group Sign the Petition