Irati Wanti - The Poison, Leave It

On July 14th, 2004, after a six-year battle, the Federal Government abandoned their plans to impose a national nuclear waste dump in central SA. The campaign was led by senior Aboriginal women − the Kupa Piti Kungka Tjuta − many of them victims of the British atomic bomb tests half a century ago.

For six years the Kungka Tjuta travelled the country, 'talking straight out'. They called their campaign Irati Wanti - the poison, leave it. They explained, they demanded, they marched and sang. They told of extraordinary personal histories. They wrote passionate letters to politicians. They won.

The Kungka Tjuta wrote this statement soon after hearing about the waste dump proposal for the Billa Kalina region.  It circulated around Australia and the world.

We are the Aboriginal Women. Yankunytjatjara, Antikarinya and Kokatha. We know the country. The poison the Government is talking about will poison the land. We say, "No radioactive dump in our ngura - in our country." It's strictly poison, we don't want it.

Listen to us! The desert lands are not as dry as you think! Can’t the Government plainly see there is water here? Nothing can live without water. There’s a big underground river underneath. We know the poison from the radioactive dump will go down under the ground and leak into the water. We drink from this water. Only the Government and people like that have tanks. The animals drink from this water: malu–kangaroo, kalaya–emu, porcupine, ngintaka–perentie lizard, goanna and all the others. We eat these animals, that’s our meat. We’re worried that any of these animals will become poisoned and we’ll become poisoned in our turn.

The poison the Government is talking about is from Sydney. We say send it back to Sydney. We don’t want it! Are they trying to kill us? We’re a human being. We’re not an animal. We’re not a dog. In the old days the white man used to put poison in the meat, throw them to feed the dogs and they got poisoned, straight out and then they died. Now they want to put the poison in the ground. We want our life.

All of us were living when the Government used the country for the bomb. Some were living at Twelve Mile, just out of Coober Pedy. The smoke was funny and everything looked hazy. Everybody got sick. Other people were at Mabel Creek and many people got sick. Some people were living at Walatina. Other people got moved away. Whitefellas and all got sick. When we were young, no woman got breast cancer or any other kind of cancer. Cancer was unheard of with men either. And no asthma. We were people without sickness.

The Government thought they knew what they were doing then. Now, again they are coming along and telling us poor blackfellas, “Oh, there’s nothing that’s going to happen, nothing is going to kill you.” And that will still happen like that bomb over there. And we’re worrying for our kids. We’ve got a lot of kids growing up on the country and still coming more, grandchildren and great grandchildren. They have to have their life.

It’s from our grandmothers and our grandfathers that we’ve learned about the land. This learning isn’t written on paper as whitefellas’ knowledge is. We carry it instead in our heads and we’re talking from our hearts, for the land. You fellas, whitefellas, put us in the back all the time, like we’ve got no language for the land. But we’ve got the story for the land.

Keep the poison out of Muckaty

After abandoning plans for a national dump in SA in 2004, the former Howard federal government announced in 2005 that it would pursue three sites in the Northern Territory, passing legislation to override NT government opposition. The sites were Harts Range, Mt Everard and Fishers Ridge. Amendments made in 2006 allowed additional site nominations from Aboriginal Land Councils.

The Northern Land Council offered an area on the Muckaty Land Trust for assessment in 2007, despite opposition from many Traditional Owners. A determined community campaign led by the Traditional Owners gained support from trade unions, public health and human rights organisations around the country. Annual demonstrations in Tennant Creek pledged direct action against any attempts to build the dump. 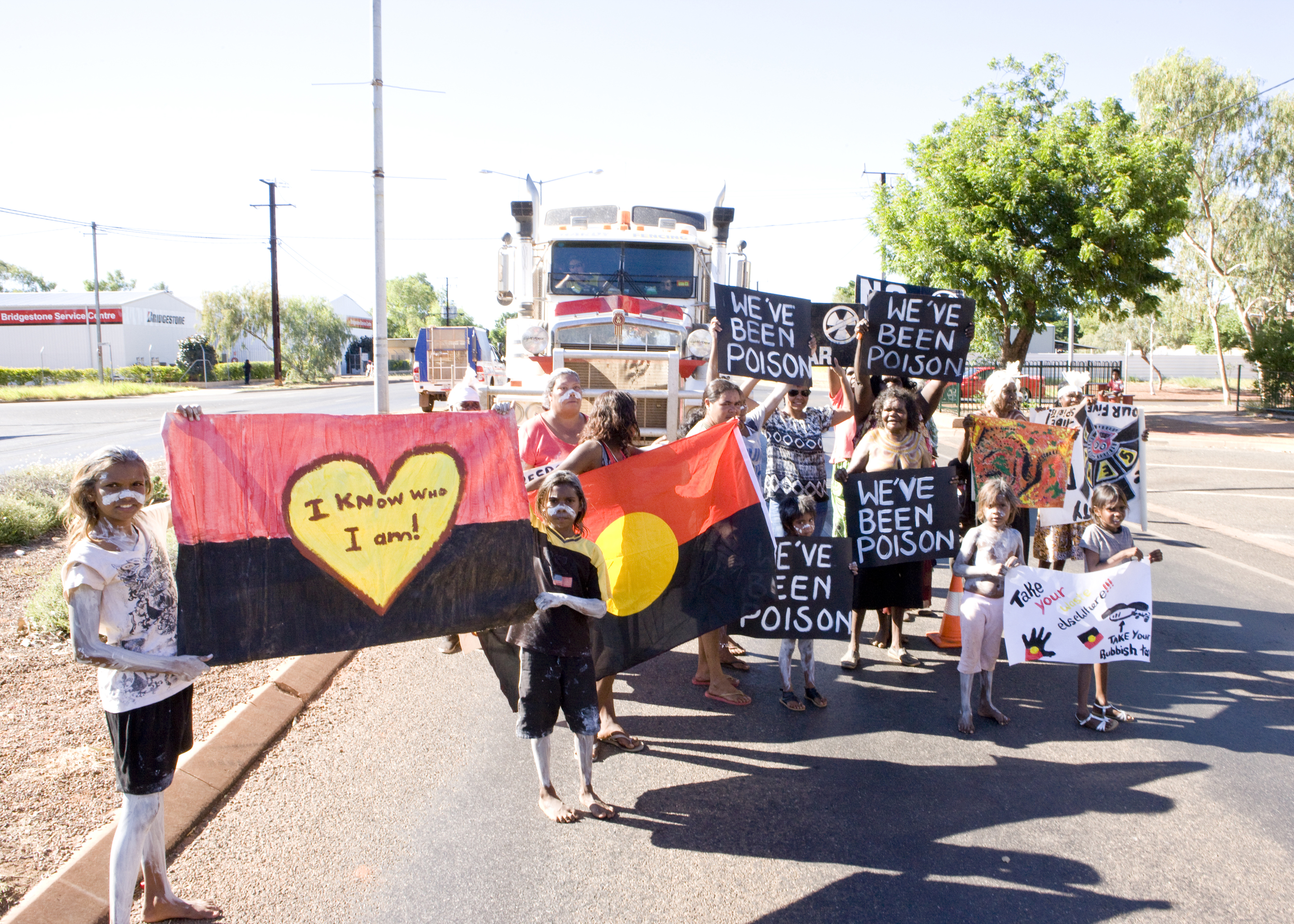 The perception of remote Australia as an uninhabited sacrifice zone was captured by comments made by former Science Minister Brendan Nelson, who asked “Why can't people in the middle of nowhere have a low and intermediate level waste facility” and his successor Julie Bishop, who stated the sites were “far from any form of civilisation.”

The Department of Defence sites were under consideration until 2012, but it was clear that Muckaty was the preferred site,with the government ignoring clear opposition and calling it a voluntary nomination.

In June 2014, half way through federal court proceedings launched by Traditional Owners, the federal government agreed to not further pursue the site.

Traditional Owners released the following statements after hearing their campaign had been successful:

Marlene Nungarrayi Bennett, Warlmanpa woman said, “Today will go down in the history books of Indigenous Australia on par with the Wave Hill Walk-off, Mabo and Blue Mud Bay. The Warlmanpa Nation has won an eight-year battle against the might and power of the Commonwealth Government and Northern Land Council. Justice has prevailed and this is a win for all Territorians.”

Kylie Sambo, a Warramungu/Warlmanpa hip hop artist who wrote the popular track “Muckaty” released a statement of solidarity when it was announced that the Wallerberdina site in SA was the only one shortlisted under the current process.

We heard in the news that people want to nominate Muckaty for the nuclear waste dump again.

Minister Gray and Minister Macfarlane visited us here in Tennant Creek- they heard what we said about the nuclear waste dump-we said NO.

They have seen the conflicts between us.

Enough is enough- this issue will not be resolved, we want the Northern Land Council to just let it go.

Leave the waste where it is and don’t dig up any more uranium.

We fought hard for our people to get Land Rights. The old people that have gone, they fought hard and now people are trying to sell their soul and country- again.

We were so happy the first site nomination was closed- we fought very hard to stop it. We had just relaxed after stopping the waste dump and now they came back and kicked us in the guts.

We said in court and we said it to the Minister- we all agreed we don’t want it on Muckaty Land Trust. All the Warlmanpa said this, the ones who went against the waste.

We want to be clear- we do not want the nuclear waste anywhere in the Muckaty Land Trust.

It looks like the same mob are going to be fighting again to protect Muckaty near where Milwayi goes and comes back into Helen Springs. We are all connected through there.

We want the Northern Land Council and government to stop doing this. Why don’t they just stop hassling people asking them if they want this waste to go on Muckaty?

They think its is their land but it is not right to put the waste there. We will be making the same argument again, standing together to say NO.

When we met with the NLC in Tennant Creek they said they would not push ahead a new nomination. This news today made us very sad.

We want to talk to the NLC Full Council before they vote about a nuclear waste dump at Muckaty. We are Traditional Owners and we speak for that land.

Keep the poison out of Muckaty.

For years the government pursued the site of Wallerberdina in the Flinders Ranges. The dump was opposed by many Adnyamathanha Traditional Owners, who were not consulted about the nomination of the site by former Liberal Party politician Grant Chapman.

When faced with the threat of a nuclear waste dump many people in the surrounding communities came together - from Hawker, from Quorn and surrounding areas. A group called FLAG, the Flinders Local Action Group was formed and worked tirelessly and for years to contest the nomination of the site. Over the years Traditional Owners and community members attended numerous meetings, organised rallys, spoke to the media and those within their community.

In December 2019, it was announced that the Wallerberdina site in the Flinders Ranges would no longer be considered for a national nuclear waste facility!

This was welcome news for many in the Flinders Ranges community. For four years the voices of Traditional Owners, Pastoralists, residents of Hawker, Quorn and the wider Flinders Ranges have voiced their opposition and spent hours upon hours talking, travelling and working hard to get their message out.

The No Dump Alliance Congratulates everyone who has fought so hard to keep such an amazing place dump-free. Thank you to everyone that signed postcards, offered support, came to rallies and contributed to this big win. The Flinders Ranges has breathed a huge sigh of relief. 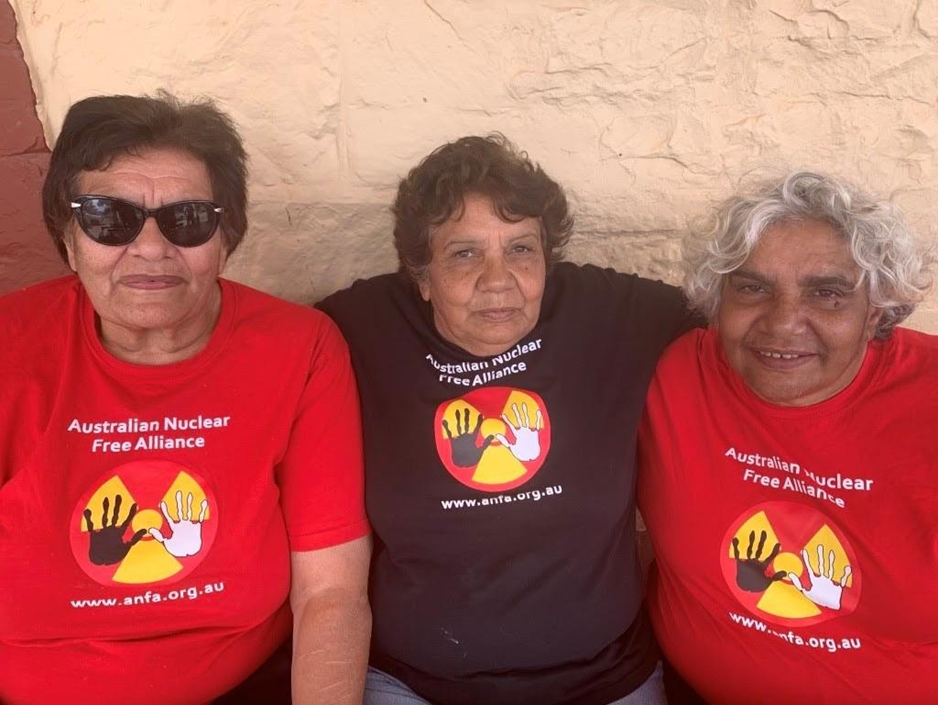 “We are so relieved, it has been a big, long, hard, fight and we never backed down. We always knew that Wallerberdina was not the right place for nuclear waste and now Minister Canavan can see that too. We have won.” ‒ Vivianne McKenzie